A Word On Pen Names 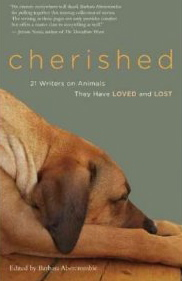 I just finished a book titled Cherished: 21 Writers On Animals They Have Loved and Lost and it got me thinking about my first dog, Lady.

My childhood was anything but normal, but before my eighth birthday, Lady came into my life to make everything seem worthwhile.  I was born with what is called Mid-Facial Dysplasia, and from the age of four years old, started a series of reconstructive surgeries that would help build a bridge for my nose, and more pronounced features.
Lady arrived just as I was beginning to understand why I had to have these surgeries.  I began to understand that my childhood wasn't like that of other kids and sometimes I suffered the consequences of being "different" (even though you could never tell I had surgery).  And funnily enough, I was tricked into taking Lady from a friend of my aunt's, who lived on this duck hunting ranch.  He told me that they were going to put Lady to sleep, and of course I jumped at the chance to save her.  Or rather, as I would soon learn, she saved me.
My surgeries were never a scary experience.  Nothing bad ever happened to make me apprehensive about having another one.  My parents have always been my rock, but Lady was the one I could tell my secrets to.  Like all dogs, she had that calm, quiet way about her that made everything feel like it was going to be okay.  It was like she always knew when I came home from the hospital to not jump on me or be rambunctious around me.  She would sit quietly by my bed or the couch and would reluctantly allow my parents near me.
I spent my entire childhood with Lady who eventually came to be known as Ladybugs.  In 1998, she was 10 years old, and little did I know that I wouldn't have her too much longer.  In that same year, I had a major surgery called a cranialplasty and my grandfather was in the hospital, dying of kidney cancer.  I consider myself lucky to have had her during my recovery from that surgery and to help me through the grief of losing my grandfather. 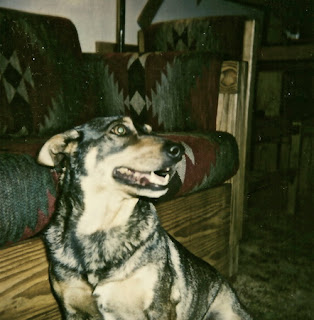 On Christmas morning of that year, Lady passed away just as I woke up at the six thirty in the morning.  Let me tell ya, that was not a very Merry Christmas morning opening gifts.  Later that day, we took her out to our property (where we would soon build a house) and laid her body in a box to buried the next day.  God, that was the worst Christmas I've ever had.  We couldn't bury her that day because we had like 20 people coming for Christmas dinner.  So, the next morning, dad dug a hole over by the creek and we had a little ceremony for her.  Now almost 14 years later, I still miss her very much, even though I have had dogs in between then.  She will always be number 1.
Posted by Sara Jackson at 5:57 PM No comments:

Mr MaGoo's Shenanigans: Do You Know About FACE Foundation?

Mr MaGoo's Shenanigans: Do You Know About FACE Foundation?: "Woof! It's been a whirlwind July. Mom and I have been on a book tour promoting our (my) book Real Dogs Don't Whisper . It's been a tail ..."
Posted by Sara Jackson at 9:04 PM No comments: