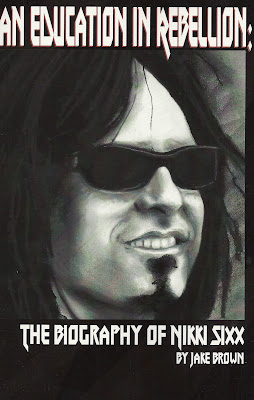 
Nikki Sixx, rock 'n roll's ultimate bad boy and the ring leader and founder of Motley Crue.  The band's definitive history was recorded in the Crue's collective bio, titled, "The Dirt" in 2001.  It wasn't until a year later that Jake Brown came out with what fans hoped would be an inside look at their favorite "mad scientist of rock," Nikki Sixx.
The title promises all the juicy inside secrets of Nikki's life.  Crueheads already know Nikki's story, but were hoping for a fly on the wall's view into their favorite bass player's life in and out of Motley Crue.  At almost 500 pages, the book should've delivered, but unfortunately, it didn't.  The book is nothing but regurgitated facts and interview quotes from Nikki himself and those closest to him.  Jake Brown robs from other sources to compile his chronological history of Nikki Sixx.
Die-hard fans will instantly recognize quotes and facts from such sources as old interview footage, paragraphs from "The Dirt" and Vh1's Motley Crue Behind The Music.  This book is total and complete let down to Crue fans.  Not only is can the book be construed as plagiarism, but it often repeats whole paragraphs twice in the same chapter to make the word count larger.  There are grammatical and punctuation errors all over the place.  Each new chapter spends at least a page and a half recapping the previous chapter.
As a long-time fan of Motley Crue and especially Nikki Sixx, I was sorely disappointed in Jake Brown's attempt at a "biography."  If you want an accurate account of the life and times of the members of Motley, read "The Dirt," or  the "Heroin Diaries."
Posted by Sara Jackson at 6:23 PM